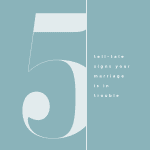 I knew I was struggling, but I didn’t quite realize we were struggling. So, I buried myself in my role and hid in the shadows because I wanted to be a good wife and mom. (It sounds so counterintuitive now.)

I remember when we first got married. I had dreams of being the perfect wife. I was going to blow Matt’s mind with my cooking skills, home making abilities and willingness in the bedroom.

Instead, I talked him through how to make dinner from the couch, nauseas from all day morning sickness. I couldn’t stand the sight or scent of him much less did I want to be with him. And I delivered an impassioned speech about how I would no longer be picking up his underwear off the bathroom floor. And that was only the first month of our marriage.

Unfortunately, it never really got better. There were some good times and even a good season here and there, but overall, I’d characterize our marriage over the next twenty years as extremely difficult.

Waking up to reality is hard. As I relive this day of our road trip, I’m more aware of how God used my circumstances to gently open my eyes to see. The caverns we explored that day were a picture of how deep the stress in our relationship ran, as well as how deep we would each have to dig to heal our dysfunctional marriage.

I woke up to sounds of Matt coming in and out of the front door. I lingered in bed wondering what kind of mood he was in after we’d gone to bed somewhat angry with each other and having spent the morning finding and replacing and radiator cap in the parking lot of an unfamiliar town.

At this point Hannah started stirring.

We’d made plans to see the Carlsbad Caverns that morning, then head to Arizona.

Between sinus pressure, poor sleep, and feeling stiff and swollen from sitting in the car for twelve or so hours the day before, it was tempting to skip the caverns and just get on the road to Arizona. But Hannah picked up on the mood of the morning and convinced us to keep our plans.

We were in awe of the depth and width of the caverns. It was really hard to wrap our minds around men lowering themselves down on rickety rope ladders with nothing but headlights to see as they explored the caverns. Little did I realize the foreshadowing.

At the end of the tour, we stood in a very long line for the elevator. That’s where we met Ben and Lois, an eighty-something-year-old couple who had been traveling the past two months.

As we talked to them, I wondered if Matt and I could be like Ben and Lois one day; long time partners enjoying life together.

Once we exited the caverns, I was hoping to eat dinner and then watch the bats fly out of the caves, but Matt was ready to get back on the road. My survival mindset went into action; instead of risking an argument over whether we stay or go, I just went along with Matt. We loaded up with snacks from a nearby convenience store and hit the road.

The original plan was to arrive in Tucson around dinner and explore the nightlife of the downtown area where we were staying. But, it was close to midnight by the time we arrived.

Disappointed had set in over the change of plans. And Matt was growing anxious as we drove up and down the dark roads of a new town. I was so relieved when we finally pulled into the driveway just so we could stop arguing over directions. Everyone got their luggage out of the car and walked up the stairs to the Airbnb we’d rented for the night.

A flip of the light switch revealed an open living space with a queen bed, a leather contemporary futon, a coffee table, and a t.v. After some debate over who should get the comfortable bed, I suggested Matt have it since he was the one who had been driving.

The Mirror Looking Back at Me

All the critical signs of a dysfunctional marriage were there.

It’s so clear to me now. My baggage plus Matt’s baggage equaled a recipe for an unhealthy marriage. The dysfunction we each brought into our marriage complemented each other beautifully.

While I hoped we could one day be more like Ben and Lois, I had a hard time seeing past as is, and had no idea how to change our relationship. Honestly, I felt stuck in a pit of despair.

At that point, all I could see was the stick in Matt’s eye. It took lots of counseling sessions, a great deal of prayer and introspection and a few years to actually see the log in my own eye. When I got honest with myself, I realized I’d lived in this pattern of disregard and self-destruction my entire life.

But hope was just around the corner.

Want to know what happens next? Continue reading

Are you busy and overwhelmed? I can help. Sign up to get simple living tips delivered straight to your inbox every Saturday.

Are you busy and overwhelmed? Join me for simple living tips delivered to your inbox every Saturday! It's the solution you've been looking for.