“I’ve had enough of you!” My nephew screamed at his little sister.

The thing is, I’d had enough, too. They’d been fighting all morning, and my small house was starting to feel really crowded. So, instead of intervening, I pulled the duvet over my head and hid there, listening for silence as I wished away the bumping, banging and yelling from the guest room down the hall. I also found myself feeling really glad that I’d raised an only child. Praise be.

As I lay there under the covers, I felt guilty for leaving them unattended for so long. And, for hoping they’d work it out when I knew they were way past that. (This was the opposite of the fun Summer plans I had for them.) But mostly, I was disappointed in myself. I thought I’d grown, and that if I was in this type of situation again (after not being around young children for many years now) I’d handle it with so much more grace and patience than in the past.

The reality is, I did.

I had to remind myself that growth doesn’t mean I’m not human. It does mean I’ve learned how to respond rather than react to triggers. (As a sleep-deprived introvert, I was definitely feeling triggered that morning.)

In the final moments before I finally peeked over the covers, a feeling of solidarity with all the moms whose kids just got out of school for the Summer swept over me. I think there was empathy mixed in there too, which is why I want you to know, I see you.

It’s also why I want you to make room for an intentional Summer.

3 Keys to Enjoying an Intentional Summer

The first key to enjoying an intentional Summer is to know yourself.

What makes you feel like a person? Do you know your limits or triggers? How can you fill your cup? These questions lead right into the second key.

My Mom is an extreme introvert who had four children with less than six years between the oldest and youngest. (I’m the oldest.) No wonder she used to lock us out of the house!

One Summer day, my brother, sisters and I were playing under the carport one day when we looked up to see a snake slithering down the street, then turning down our driveway as if he had directions to our house. Our eyes grew big, and our hearts raced with fear as we screamed, “Snake! Snake!”

Looking for an escape we tried to go inside, but the door was locked. We banged on the door, yelling for our mom.

We stood there screaming, paralyzed with fear, when all of a sudden, the next door neighbor came running over with his shovel and killed the snake.

So, maybe don’t make room by locking the kids out of the house. But, if you do, use the next key.

Key #3: Give yourself grace.

You are human. Your kids are human. Someone is going to lose their patience. When everyone is calm again, look back at the situation to find the root cause. Then, address it. (Chances are, as in my situation, everyone, even the grown ups, will need a little heart check.)

If these tips sound like they’re easier said than done, you’re right. But, I want to encourage you to stick with it because practicing mindfulness has a way of redeeming off-plan moments. If you get to a place where you want to give up, try the five second rule. I hadn’t heard of the five second rule while my niece and nephew were staying with us, but time was definitely on my side miserable morning. 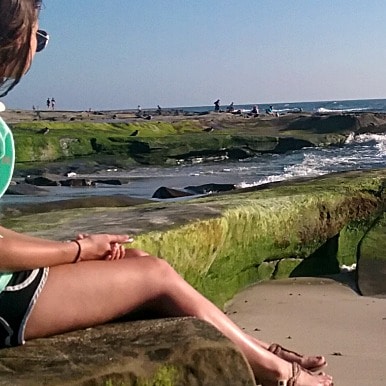 Once I rose from the covers and pulled the blinds, I realized the rain had cleared, and the sky was filled with bright sunshine.

“Get your swimsuits on. We’re going to the pool.” The mood in the house went from exasperated to excited in a matter of seconds.

We drove through Chick-fil-a on the way to the park, had a picnic lunch, and enjoyed the pool for a couple of hours. On the way home, the conversation came around to my niece and nephew sharing their feelings about each other, especially the ones that rise up when they fight. I got to help them properly identify what they were feeling, and teach them how to express it. Their newfound understanding seemed to make the truck feel less crowded, like they’d made space for each other, and I’d made space for them.

I wouldn’t trade those precious moments for anything. Not even more time under the covers.

That is what planning an intentional Summer is all about.

I’m Mrs. Hines, a.k.a. Sharon. I’m a wife, a mother and a teacher. I’m also an extroverted introvert who is partial to red wine and loves live music. My home and the beach are in a tie for my favorite happy places. And I love to laugh.

Conquer Clutter and Take Back Your Time in 3 Simple Steps

Enter your name and email address to get your Free Guide.
Your information will *never* be shared or sold to a 3rd party.